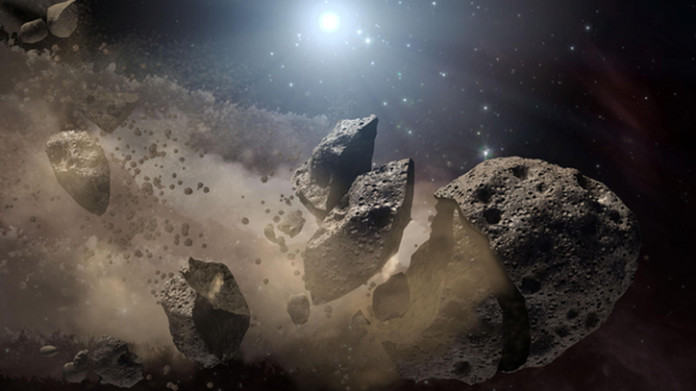 Nuking an asteroid out of the sky to protect the Earth is great fodder for the silver screen. However, new research suggests that simply exploding a threatening space rock may not save us quite as simply as we expect.

Scientists find rogue asteroids roaming our solar system often — just last month they discovered one that could strike the Earth — and one of the ways to deal with these potential threats is to impact them, knocking them off course. NASA is currently planning an asteroid redirect mission where it’ll send a kamikaze spacecraft into the moonlet of an asteroid known as Didymos, barreling into the rock to shoo it away.

Yet, we haven’t had a lot of opportunities to study asteroids up close, so we can’t appreciate exactly how they are structured or how they might be destroyed. It has been believed that bigger asteroids may be easier to destroy because they would be more likely to have cracks and weaknesses that make them easy to blow apart. Thus, if an asteroid were to threaten our peaceful existence, what should we do?

“Are we better off breaking it into small pieces, or nudging it to go a different direction? And if the latter, how much force should we hit it with to move it away without causing it to break?” asks Charles El Mir, lead author on the study, in a press release. Those questions are exactly what he and a team at Johns Hopkins University set out to answer.

Their findings, published in an upcoming issue of the journal Icarus, are based on computer simulations of asteroid impacts. They plugged in parameters that digitally recapitulated a small asteroid, about 1 kilometer wide, impacting a large asteroid, about 25 times bigger, while travelling at 5 kilometers per second.

A previous model had shown that the large asteroid was obliterated by this type of collision — but the Johns Hopkins team found an entirely different endgame. According to their modelling, the asteroid would greatly fracture in the fractions of a second after an impact.

Over the hours after an impact though, the team showed the large asteroid broke apart into smaller pieces but wasn’t entirely obliterated as previous research had shown. The fragments that flew off the asteroid were then pulled back together by the damaged asteroid core, due to the overwhelming effect of gravity.

“We used to believe that the larger the object, the more easily it would break, because bigger objects are more likely to have flaws,” said El Mir. “Our findings, however, show that asteroids are stronger than we used to think and require more energy to be completely shattered.”

The strength of the asteroid to resist such an impact allows it to preserve its gravitational pull, which could wreak havoc if we were to blindly fire rockets at an incoming rock. Understanding these interactions better prepare us for the decisions that will have to be made, should an asteroid be set on colliding with the Earth.

The Latest Bitcoin Bug Was So Bad, Developers Kept Its Full Details a Secret