Folks, it’s happening. Ewan McGregor is back to play Obi-Wan Kenobi in a new show making its debut on Disney Plus.

“Ask me,” said Ewan McGregor, making an appearance at the the D23 Expo. “Am I going to play Obi Wan Kenobi again?”

It was a good moment.

Lucasfilm President Kathleen Kennedy dropped the news at a Disney Plus presentation designed to show off trailers, screen first-look videos and parade talent at its fan convention, the D23 Expo in Anaheim, California. McGregor’s return has been hotly speculated: he recorded a voiceover line for 2015’s Star Wars: The Force Awakens and The Sun’s sources claimed in June 2018 that the actor might have shot scenes for December’s Star Wars: The Rise of Skywalker.

According to Kathleen Kennedy “the scripts are ready” and they are planning to shoot next year. But as of yet, no hard release date on when the show will actually be ready to watch.

The series could theoretically help fill the character’s gap between 2005’s Star Wars: Revenge of the Sith and 1977’s A New Hope, which has otherwise been filled with non-cinematic stories such as through the Star Wars Rebels animated series.

Disney Plus, a $7-a-month service set to launch Nov. 12, is the highest-profile example of traditional Hollywood digging in to compete in streaming against likes of Netflix, Amazon and — soon — Apple. With tech giants pouring money into their own TV shows and movies and luring consumers away from traditional pay TV, Disney is aiming to create a single streaming hub for all of its family-friendly content.

Disney Plus is already banking on the Star Wars universe to draw subscribers into its new service. A live-action, big-budget Star Wars spinoff The Mandalorian is the most high-profile original titles that will be available on Disney Plus at launch. The service is also developing a prequel series based on Rogue One that will star Diego Luna, who played Cassian Andor in the original movie. And at launch, Disney Plus will include all the Star Wars movies from the first two trilogies, as well as The Force Awakens and Rogue One. 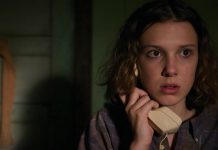